Ghouls and goblins may dominate the Halloween scene, but a giant dragon is sure to also delight and fright. Scott Stoll of Stolloween is back with another unique project for The Home Depot’s Halloween Style Challenge. This time, he’s sharing how to create a haunted mine dragon lair. Enter if you dare!

In the small town that I grew up in there is a local legend that is passed from generation to generation. The story revolves around a very wealthy man known only as “old man Grafton.”

Grafton trusted no one except his faithful pony that hauled gold from the mine and his cat named Mr. Sparkles who was said to have the ability to sniff out gold a mile away.

Every night Grafton and his small mine crew would come to town, spend a few hours at the local tavern, raise a little ruckus then be on their way.

One day they suddenly stopped coming into town. After a few weeks the local towns people started to wonder what became of Grafton and his crew. Several expeditions ventured into the dark forest in search of the mine, some never returned.

Later that year on All Hallow’s Eve, a man frantically burst into the tavern screaming a tale of finding Grafton’s mine and how it was home to a gigantic fire breathing dragon. The fact that the man’s clothes were severely scorched would seem to support his tale. Sadly the man died the next morning and the mine remained a mystery.

To this day it is believed there is still a lost gold mine in the dark woods of northern Michigan, and on Halloween night, if you listen very closely, you will hear the roar of the giant beast echoing across the land.

If you have not heard this legend don’t feel bad because I just made it up.

This year The Home Depot asked me to incorporate a dragon, pony skeleton, and cat skeleton into a spooky scene for the 2020 Halloween Style Challenge and I thought it would be fun to create the legend of old man Grafton.

When I found out what Halloween products The Home Depot was sending, I developed a back story and challenged myself to turn our garage into a haunted mine shaft/dragon lair.

The mine shaft would depend on the forced perspective technique, an optical illusion to make objects appear farther away, closer, larger or smaller than they actually are.

In addition to the dragon, pony and cat, I visited homedepot.com and ordered some skeletons and barrel planters of different sizes, as well as lanterns, a fog machine, builder’s paper, paint and vinyl plank flooring. The Haunted Mine Dragon Lair theme would nicely support the variety of different products.

Armed with paper and pencil I drafted concept sketches to give me an idea of what I would need to create the illusion of our garage being the entrance to a lost gold mine.

Most of the products were delivered to our house or local store very quickly, making the whole process very easy.

The mine shaft forced perspective illusion was achieved by making five different backdrops. Each consecutive backdrop would be 50 percent smaller than the previous.

Our garage door entrance is 7 feet high by 10 feet wide, which meant that the first backdrop would have to be that large.

The backdrops were made using builder’s paper, a heavy brown craft paper used to cover floors and such when painting. The builder’s paper was glued together to get the needed size. Then I carefully crumpled the paper to give it a very stone-like texture.

The texture was emphasized by spraying flat black spray paint at a 45 degree angle which added a nice shadow effect.

Next, the mine shaft support beams were made by simply gluing vinyl plank flooring to the paper backdrop. Due to the size of the first two backdrops, wood boards were attached to the back of the backside. Adding structural support.

The second backdrop was created in the same method, only 50 percent smaller. Each backdrop was hung from the garage door rails using wire and clamps.

Finally, a floor to the mine shaft was made from more of the builder’s paper. Crumpled and painted using the same techniques.

Setting up the finished display was pretty simple. After the backdrops were hung and properly aligned, a variety of different scale props were added to reinforce the optical illusion.

The last three backdrops were much smaller. So I drew some skeletons and barrels that were appropriate for the scale and attached them to the backdrops.

The barrels were created by duct taping two barrel style planters together, a simple and economical means to make barrels.

The dragon took center stage in front and the 5-foot skeletons, pony and cat took their positions.

The entrance was accessorized with some cool Halloween themed lanterns and black plastic chains. Antique tools and crates finished off the scene nicely, giving the space a rustic mine shaft type of vibe.

During daylight hours the scene was very fun and convincing. The 3-dimensional aspect of the forced perspective mine shaft tricked your brain into believing that the tunnel extends hundreds of feet into the distance.

Once the sun goes down the scene becomes magical. The dragon was lit with a blacklight spotlight and the remainder of the scene lit with red LED floodlights and yellow bug light bulbs.

One of the cool things is that the fog spewing from the dragon’s mouth picks up the red and yellow light which makes it look like fire.

This was a fun and challenging project. It really proves that The Home Depot has everything you need to decorate your home for Halloween.

Wishing you and yours a fun and safe Halloween! 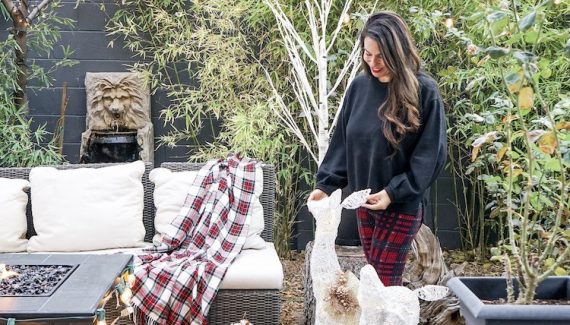